Stop by our shop or visit our eBay store (stampkingchicago). Caters to collectors of all levels including children and beginners. Sellers may wish to call ahead. Want lists welcomed.

At this point, #Chicagopex2020 is scheduled to occur as usual. We invite authors to enter our annual literature competition (one of a handful in the U.S.), which will be held even if the show gets cancelled. We are working on posting the prospectus and application to the website (should be up by early next week). Note, the competition accepts hard copy articles, books, journals, as well as digital entries such as websites.

This just in: Chicago Philatelic Society is a community partner for this event. Hope you will join us.

Postal mail was the social media of the 20th century, but during times of war, changing borders and occupying forces shifted the dynamics by which international mail could operate. During the Holocaust, ghetto and concentration camp postal censorship and routing markings on envelopes, as well as multilingual stamps of nations and postmarks of cities, helped frame the stories behind how people kept in touch while incarcerated.

Want to hear more? Dr. Justin Gordon will be sharing highlights from his area of expertise – Holocaust philately, the collection and study of postal letters – at Illinois Holocaust Museum & Education Center on January 5: https://bit.ly/38cLixM

Thanks to everyone who visited #Chicagopex2019 last weekend! We hope you found a new gem for your collection!

Wedding planners and the stamp aftermarket

This weekend is the annual #Chicagopex stamp show. If you're a #bride, it's one place you can go to buy special stamps for your invitations. Find out more about the trend: https://www.linns.com/news/us-stamps-postal-history/wedding-planners-and-the-stamp-aftermarket

These 70¢ stamps are ideal for mailing wedding invitations at the 2-ounce rate. Mint panes are becoming harder and harder to find. 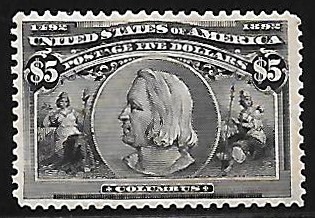 $5 Columbian in FREE Raffle at #CHICAGOPEX2019

A mint copy of the U.S. $5 Columbian [Scott 245; catalog value $2300] is the highlight of a FREE raffle to be held at #CHICAGOPEX2019 stamp show. The drawing for this stamp and other philatelic items will be held Sunday, November 24, at 2:00pm; you do not have to be present to win. Tickets for the raffle can ONLY be obtained from the dealers in the Gallery Ballroom, who are staging this event.

Reminder: The awards banquet at #Chicagopex2019 stamp show is Sat. night Nov. 23. Deadline to sign up before the show is Nov. 14. If you want to sign up at the show, you must contact Jackie Alton by 11am on Friday Nov. 22. Special diets can be accommodated. You can find the form to sign up for the banquet here:https://www.chicagopex.org/pdf-documents/saturday-awards-banquet-reservation-form-2019.pdf

Did you know the owner of Stamp King is the bourse chairman of #Chicagopex2019? It's among the largest annual stamp shows in the country! Free admission and free parking. You can visit up to 75 dealers in one location! Find out more on the website: https://www.chicagopex.org/chicagopexcurrent.html

This just in! American Philatelic Society is sponsoring a one-day on-the-road course with Jim Lee on U.S. Proofs and Essays on Nov. 21, just before #Chicagopex2019. Please visit the bottom of this web page to sign up: https://stamps.org/Learn/On-The-Road-Courses#OTRCListing

COMPEX is less than a week away! Find out more from the American Philatelic Society blog! https://stamps.org/Blog/post/upcoming-compex-2019-show-to-celebrate-the-grand-canyon-national-park

Chicago-area clubs are gearing up to present COMPEX 2019 in the last weekend of May. Read the press release and event schedule inside.

Welcome to the 62nd Annual Combined Philatelic Exhibition of Chicagoland

COMPEX was the brainchild of co-founders Dr. James Matejka and Ben Reeves, who reasoned that a joint show for all local clubs that staged small annual exhibitions could be a significant event. From the show’s beginning, each involved club presented its own exhibits (and judged them as they saw fit...

Welcome to the 62nd Annual Combined Philatelic Exhibition of Chicagoland

Sharing our love of stamps and postal history!

We thank all who have served our country. Happy Veterans Day!

Come out and support philately in Chicago! Today, we are putting labels and stamps on the #Chicagopex2018 postcards. From 10am to 2pm, we are meeting at Mather's More Than a Cafe at 7134 W. Higgins Ave. Free parking is available behind Stamp King store across the street. The club is treating participants to lunch!

Special treat at #Chicagopex2018 stamp show. Freaks and Errors film director Mark Cwiakala will do a Q&A after the free screening. Great chance to get inside scoop on the film!

Our owner, Charles, spends much time coordinating the dealer bourse for #Chicagopex every year. Find out which dealers are attending the show here:http://www.chicagopex.org/pdf-documents/2018dealerslist.pdf

Don't miss it! Screening at #Chicagopex2018 stamp show at 11am on Sat. Nov. 17: Obsession, love, money & postage, Freaks & Errors: A Rare Collection, is a film that reveals the surprisingly huge, quietly eccentric and rapidly fading world of the stamp collector. The film follows a group of people that seem to have only one thing in common, the love of postage stamps. A closer look though, reveals a slew of oddly familiar traits that connect them to each other and uncovers the consuming influence that their hobby has had in defining most aspects of their personal and social lives. https://www.freaksanderrorsfilm.com/

'Freaks & Errors' is the first, feature-length documentary film about the world of stamp collecting.

#Chicagopex18 is coming up soon! Make sure to sign up for the APS On the Road course before the show. You do not need to be an APS member to attend. Title is Postal History of World War II in the Pacific Ocean. https://stamps.org/On-the-Road-Courses

The American Philatelic Society is excited to offer learning opportunities to serve the needs and interests of beginning to expert philatelists. Enroll today to learn new things and meet others who share the same passion.

The latest on our show in Canadian Stamp News!

The Chicago Philatelic Society will present its annual philatelic exhibition, Chicagopex 2018, on Nov. 16-18 at the Westin Chicago Northwest, which is about a five-hour drive from the Canada-U.S. border in Windsor, Ont.

We're pleased to announce the COMPEX website earned a Vermeil in the American Philatelic Society 2018 website competition. Kudos to our webmaster! http://blog.stamps.org/2018/08/22/aps-2018-web-award-winners/

The American Philatelic Society is pleased to announce the winners in this year’s Chapter and Affiliates Web Awards recognizing website excellence. A total of nine groups participated in this competition, which was ope

Our owner Charles Berg serves as bourse chairman for this show. Feel free to ask him about the show and how to sign up to exhibit.

There's still time to sign up to exhibit at #Chicagopex2018. Please email our Exhibit Chairman Tim Wait at [email protected]. You can get the exhibiting prospectus and application at our website.http://www.chicagopex.org/pdf-documents/2018application.pdf

Make sure to get the show rate at the hotel for Chicagopex this Nov.: https://www.starwoodmeeting.com/Book/ChicagoPex2018

There is a mandatory 10 USD per night facility fee. The facility fee includes: one bottled of water, local and 800 phone calls, overnight self-parking and daily newspaper Monday through Friday. Please contact the hotel for further information.

There's an APS On the Road one-day course on Nov. 15, just before Chicagopex. Topic is "Postal History of World War II in the Pacific Ocean" with Ken Lawrence. You don't have to be an APS member to attend. If you go, make sure to stay over the weekend for Chicagopex - over 70 dealers! https://stamps.org/On-the-Road-Courses

The American Philatelic Society is excited to offer learning opportunities to serve the needs and interests of beginning to expert philatelists. Enroll today to learn new things and meet others who share the same passion.

Dig into your stamp collection and postal history on National Stamp Day!

Find and borrow the philatelic dictionary or encyclopedia to fit your collecting need from the American Philatelic Research Library
blog.stamplibrary.org

Learn the history of stamps and collectors, get a chronological overview of the postage stamp, and identify the different elements of a stamp
stamps.org/About-Stamps 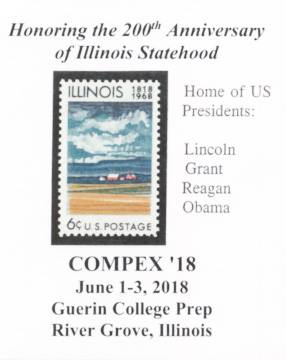 We're still accepting orders for COMPEX show cachets (2018 and past years). Please contact the store for pricing and details.

Thanks to everyone who attended #COMPEX2018. Look forward to seeing you next year! 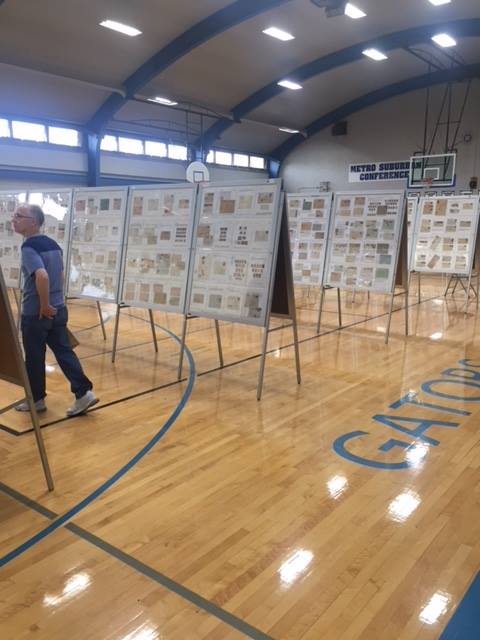 It's just after 1pm - you have just under 5 hours left to visit COMPEX today!

Owner Charles Berg is Life and Dealer Member of the American Philatelic Society and an organizer of Chicago's 2 major annual stamp shows (COMPEX and CHICAGOPEX).

Be the first to know and let us send you an email when Stamp King posts news and promotions. Your email address will not be used for any other purpose, and you can unsubscribe at any time.

Send a message to Stamp King:

Other Collectibles Stores in Chicago

Postal mail was the social media of the 20th century, but during times of war, changing borders and occupying forces shifted the dynamics by which international mail could operate. During the Holocaust, ghetto and concentration camp postal censorship and routing markings on envelopes, as well as multilingual stamps of nations and postmarks of cities, helped frame the stories behind how people kept in touch while incarcerated. Want to hear more? Dr. Justin Gordon will be sharing highlights from his area of expertise – Holocaust philately, the collection and study of postal letters – at @Illinois Holocaust Museum & Education Center on January 5: https://bit.ly/38cLixM
Please join the friendliest, most informative, educational, and helpful group for USA~collectors, sellers and traders... beginners and advanced are all welcome... discuss... learn... post your stamps... https://www.facebook.com/groups/1193157860813623/