With a focus on the community of small businesses and consumers, Staples in Woodbridge, VA provides innovative printing, shipping, technology, travel and recycling services, along with products and inspiration essential to the new ways of working and learning. Explore Staples, the Working and Learning Store, at your local Staples Store or visit us online.

Walk into 2023 with one of these planner/calendar duos by your side. Which style would look best on your desk?

A very from our Staples family to yours. May this Christmas be your merriest and brightest of them all 🎄

Be honest, who’d be stoked to get some workspace supplies this year ✋

Have you printed your holiday cards yet? If so, show them off in comments or post them and tag: and .

May your Hanukkah be filled with love, light (and lots and lots of latkes, of course).

Your holiday boxes are on the clock — literally! Ship your gifts
with us by the dates below for guaranteed delivery by Christmas.
Plus, we’re open nights and weekends.
🎁 Ship 3-day by the 19th
🎁 Ship 2-day by the 21st
🎁 Ship next-day by the 22nd

How’s your holiday checklist looking? Well, we’re here to help.
Come in to check out our ship center and check off all your
shipping to-do’s ✔

We know you’ve got tons of holiday stuff to ship to family, friends
and customers. Swing by the store, tell us your ETA, and we’ll
make sure all your 🎁 + 📦 get there in time.

In honor of holiday shipping season, can you guess the four
mail and ship products in these close-ups?

Skip the wait: Enroll in TSA PreCheck at Staples, not the airport - The Points Guy

Now available at select Staples stores: TSA PreCheck! Beat the holiday rush at the airport by enrolling at a local store. Note, there are plenty of appointments available! https://thepointsguy.com/news/tsa-precheck-staples-enrollment/

How to enroll in TSA PreCheck at Staples

Here are some ways to make your holidays less stressful and
more productive. Pick one from each row and share it.

Ship on your schedule this holiday at Staples. Are you an early, late or midday shipper?

Our store teams are ready to deliver great service. early and late 7 days a week, so come on in! 📦 https://bit.ly/3P0MzOy

Life hack: Choose boxes that scream “fun and festive” all on their own.

But seriously, mark these dates down now. Right in your phone. Do it.

We wanted to give a big thanks to our Staples associates. You do an amazing job each and every day. Here are a few shoutouts from customers who feel the same way. ❤️

We’re thankful for all our associates, customers and the communities that we serve. Wishing everyone a very .

Get into the holiday card spirit with hundreds of cool card designs at Staples. ☃️ 🌲To get started, dash into your local store or visit print.staples.com.

Show the 🌎 some love this National Recycling Day! your old tech and more in store. 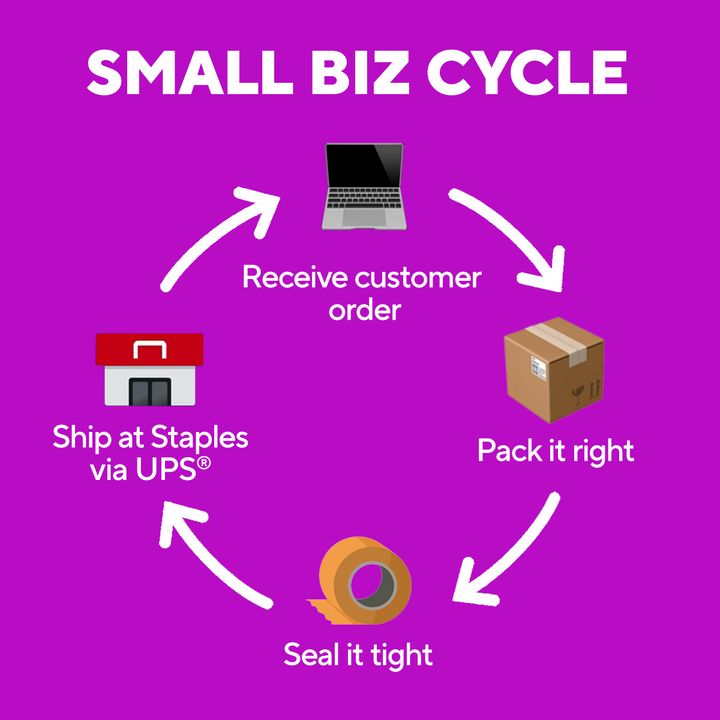 Don’t Have TSA PreCheck? This Is the Hack You Need to Know

Travel + Leisure has the latest for quick and easy travel – TSA PreCheck is now available in select Staples stores across the country! Skip the airport and head into your local participating store to get your enrollment processed in a matter of minutes (and say goodbye to slow lines and taking off your shoes for the next five years): https://bit.ly/3DMIfwW

A TikTok user shared that travelers can get TSA PreCheck at Staples.

We’re incredibly proud to recognize the dedicated, hardworking winners of our contest. In our fourth annual contest, 20 educators were selected from over 5,000 nominations from around the country to receive $5,000 for their school, honoring of their commitment to their students. Thank you to everyone who nominated, and a very big congratulations to all of our winning teachers!

Grab all these unsung heroes and level up your shipping station.

Happy Halloween from our Staples family🎃! Hot dogs, lions, superheroes and more came by the Staples corporate office to show off their costumes. Associates and children alike enjoyed spook-tacular activities and some early trick-or-treating with our team.

Happy Halloween! 👻 To celebrate, here’s a little Would You Rather: Shipping Scaries Edition. Comment your answer.

Staples is the best kept secret in shipping. And our secret behind the secret? Our associates! Whether you’re filling orders for your small business or sending gifts to loved ones, they’re ready to help you ship out some holiday cheer!

Congrats to our WFH Style Sweepstakes winners, recipients of a custom-designed office look from our !

Look who's having a blast at the ! Our Staples team is supporting the small businesses there. And if you want to know how we can support your business with print, travel, recycling and more, stop into your local store.

A heartfelt shoutout to all our Chamber of Commerce partners and our General Managers who are working hard to strengthen communities across the country. Happy National Chamber Day! Be sure to click through a few of our favorite moments.

and we’ve got everything you need at prices that won’t burst your bubble roll, plus UPS shipping and drop-off 7 days a week. ✔️Services ✔️Supplies ✔️Savings

Another day, another happy recycling customer. ♻ See how easy it is to bring in your old tech, completely free. If you know , tell us about your experience below!

Celebrate with us and give a shoutout to the teacher in your life who goes above and beyond for their students. ❤️

No need to check the calendar. tech, ink, toner, and more every single day.

We love hearing from our customers! Have you recycled yet? Learn more about our Free Tech Take Back in store or at https://bit.ly/3E4QAhk

Did you know all this tech and more? Time to declutter all the drawers and all the rooms! See everything we recycle: https://bit.ly/3UJX4Z8

True or false: you knew tech. From flash drives to fax machines, calculators to coffee brewers, see everything we recycle and get more details here: https://bit.ly/3xBhyJn

Same! Which old-school jingle is still stuck in your brain
after all these years? 🎶

Today we honor and remember all those whose lives were lost or impacted by the events of September 11th, 2001, including our extended Staples family.

At that time, Hector Bergolio was the General Manager of our store on 57th and 6th streets across from Central Park. While 21 years have passed, he will never forget the emotions of that day and those that followed.

Hector heard the news of the first airplane strike on a boom box that was set up in store for customers to play and test. He moved quickly to round up his employees to tell them what happened and confirm where they lived and received a call to close the store. Together, the team held hands and said a prayer. Hector told everyone to get home safe, and then began his 6+ mile trek over the Queensboro Bridge before he was able to get a ride the rest of the way home. Some of his coworkers walked alongside him in the same direction, along with thousands of others — crying, running, worrying about their own safety and those of friends and family they hadn’t yet been able to get in contact with.

It was only when Hector finally made it home that he felt relief. His father and mother, children who were at school, as well as the rest of his family and friends, were all safe. He counts his blessings, knowing that many were not as fortunate.

We thank Hector for sharing his powerful story with us. Our hearts go out to everyone around the country impacted by this unthinkable event.

The big supply trip is done and school is now in session. But if you forgot something or just need to refresh later in the year, remember we stay stocked with a huge selection all year.

Be the first to know and let us send you an email when Staples posts news and promotions. Your email address will not be used for any other purpose, and you can unsubscribe at any time.

Send a message to Staples:

Other Woodbridge shops (show all)