*Beautiful, unique, hand painted childrens furniture. Add a touch of Shabby Chic to any room! Follow us on instagram! @LittleBeauFurniture I am a self-proclaimed artist who absolutely loves painting and creating beautiful things.
(2)

I find turning an average item into something unique and special incredibly rewarding. Please contact me for any custom orders, I am happy to try something new! I usually work with wood furniture, and distress and paint it myself in my home shop. Please keep in mind, all items are made distressed, and no two pieces are going to be exactly the same. This is part of their beauty! Each item is unique

I find turning an average item into something unique and special incredibly rewarding. Please contact me for any custom orders, I am happy to try something new! I usually work with wood furniture, and distress and paint it myself in my home shop. Please keep in mind, all items are made distressed, and no two pieces are going to be exactly the same. This is part of their beauty! Each item is unique

Gorgeous vintage high chair for baby! Beautiful and unique custom dark blue -gray color, distressed and sealed with black wax. This lovely color would look great in any room and work for boys or girls! Easy to clean, and no maintenance required! Free local pick up! Please contact me directly to

New items posted, and a big sale! Check it out! #vintage #jennylind. https://www.etsy.com/shop/LittleBeauFurniture

All done! ✅✅✅
Shipping out tomorrow! Now the question is, did the grinch steal a high chair instead of Christmas OR did someone spot a leprechaun?? 🤔

Getting this green beauty ready to ship! #jaderenaissancechalkpaint #vintage #jennylind 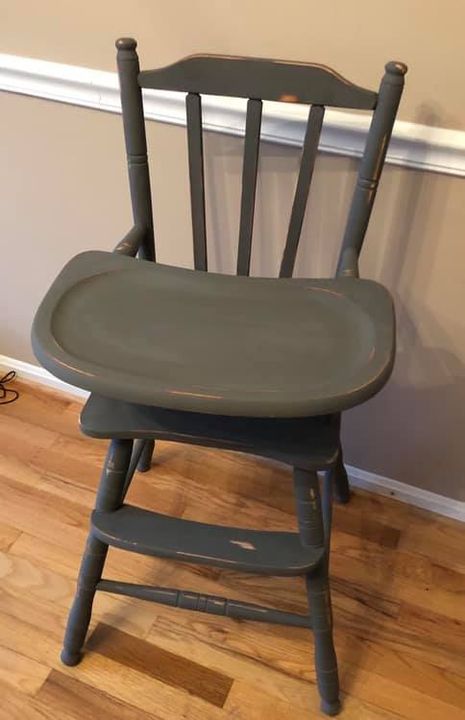 We have some very exciting things going on at LBF! Can’t wait to make the official announcement! #nextweek #bignews #comingsoon

Shipping out today! Gorgeous dark grey distressed vintage high chair! Looks like grey is the must have color this season! #vintage #jennylind #littlebeaufurniture

Gorgeous vintage wooden high chair, painted a beautiful custom gray color. Distressed in all the right places - it would fit in perfectly with any decor. Painted using Annie Sloan chalk paint and sealed with Annie Sloan wax. Slide lock hardware on the tray. This is an item that

Don't forget to check in and see updated listings in our shop! #vintage #jennylind #americanmade https://www.etsy.com/shop/LittleBeauFurniture?ref=listing-shop2-all-items-count#items

Browse unique items from LittleBeauFurniture on Etsy, a global marketplace of handmade, vintage and creative goods.

Mrs. Ashley Desoto has been a busy lady! Live now!!

Beautiful vintage wooden high tray with popular swing tray! Custom mixed color using Annie Sloan chalk paint and sealed with Annie Sloan wax! Gorgeous slate blue color! Tons of Charm and so much detail in the woodwork! One of our prettiest chairs yet! Sure to become a family heirloom. Shipping is av...

It's live!!!! Check it out! https://www.etsy.com/listing/561457847/vintage-wooden-high-chair?ref=listing_published_alert

Beautiful and whimsical bright and cheerful green and white vintage high chair! Gorgeous detail down the back and amazing turned legs! Swing tray style for getting baby in and out easily! Painted in high quality Annie Sloan chalk paint, heavily hand distressed, and sealed with Annie Sloan wax- this…

As of September 2017- I am taking on projects on a limited basis. Please feel free to contact me for more information or questions about a specific piece! Prices and timelines for each project vary!

I actually like a lot of the personal touches they added to their home! It shows that no matter how much money you have, (or don't have) you can still create beautiful and one of a kind pieces for your home! http://greatideas.people.com/2016/02/25/kandi-burruss-real-housewives-atlanta-home-todd-tucker/?xid=socialflow_twitter_greatideas

Kandi Burruss and husband Todd Tucker’s house is a perfect blend of vintage and new.

Absolutely gorgeous very unique wooden high chair for baby! This chair is just amazing!!! All original hardware in tact, and I have added new

Will the Real Jenny Lind Please Stand Up?
DESIGN HISTORY

Jenny Lind cribs, beds and high chairs are a classic in children's rooms (even modern ones) and we've seen a host of them on Apartment Therapy. Jenny Lind is often mistaken to be a company or a brand, but it's neither. It's simply a style of furniture distinguished by turned posts or what we call spindles. So, just who was Jenny Lind and why is our furniture still named after her?

Was she a:
a) pioneering furniture maker
b) revered opera singer
c) early child safety advocate

Jenny Lind, born Johanna Marie, was born in 1820 in Sweden and was an...opera singer! After taking Europe by storm and earning the moniker The Swedish Nightingale Lind sailed to New York in 1850 where she was greeted by a crowd of over 40,000 admirers. Under the management of P.T. Barnum she toured across America giving over 90 concerts and was a sensation everywhere she went. President Millard Fillmore declared her performance in the New National Hall the most exciting thing to happen to him since entering the White House.

Simply put, she was the Lady Gaga of her day.

So how did she become associated with the furniture style we still refer to today as Jenny Lind? Many things were named after her during her lifetime including a clipper ship The Nightingale, the Jenny Lind Polka, parks, streets and even a Gold Rush era California town. Cottage-style spindled furniture bore her name after she reportedly slept in a bed with turned spindle posts. The name stuck and so has this style of furniture.

I hope you enjoyed this little history lesson and may all your children sleeping in Jenny Linds be lulled to sleep by nightingales, Swedish or otherwise...

Woa- starting to list our items on eBay means you could get an item for a significant discount! Check it out!

Lots of new items in the shop this week! Check them out! https://www.etsy.com/shop/LittleBeauFurniture

Please email me for personalizing orders! I can personalize any item with any name or short phrase you would like for NO ADDITIONAL FEE!! I

Newest item has arrived! This vintage oak high chair is too adorable!!! https://www.etsy.com/listing/248561324/vintage-wooden-high-chair?ref=shop_home_active_1

Beautiful vintage solid oak high chair. In spectacular condition!!!! The details on this chair are adorable, beautiful turned legs and

Be the first to know and let us send you an email when Little Beau Furniture posts news and promotions. Your email address will not be used for any other purpose, and you can unsubscribe at any time.