Commonwealth Books publishes books that remember the history of the American colonial and revolutionary eras. We also produce programs in which we interview individuals who played notable roles in creating this history.

over the past few months we have had conversations with Richard Henry Lee, Sally Fairfax, General Edward Braddock and John Dickinson, the Penman of the Revolution. For information about coming events, refer to our website at http://www.commonwealthbooks.org/Upcoming-Events.html.

"Laincourt's comments on America promise to be an exciting addition to US scholarship." http://omkt.co/AAEd2d

Here is a story you will find interesting http://omkt.co/AAEI5V

Check out what Cyndi Spindell Berck has to say about "the triumphs and tragedies of American history" http://omkt.co/AAD8j6

This work will be the first English summary of la Rochefoucauld's travel notes in 200 years! http://omkt.co/AADRVG 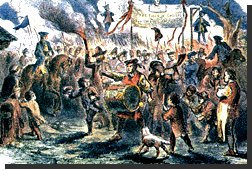 The ebook edition is now available at Amazon, Barnes & Noble and other online book sellers:

The First Revolution in the Minds of the People

John Adams claimed in a letter he sent to Thomas Jefferson on 24 August 1815 that "the revolution was in the minds of the people, and this was effected from 1760–1775.” On the 250th anniversary of its commencement, philosopher James Thompson took a fresh look at Adams’s revolution. He presents his four startling discoveries in his newest book, The (First) Revolution in the Minds of the People:

1) A large majority of American colonials probably opposed political independence when the shot was fired heard round the world.

2) Having declared independence, patriotic leaders had to preserve their new family of states. We all know that they repulsed the assaults of George III armies. Few of us understand that they also prepared to resist the kind of insurgency they used to undermine the king’s colonial government. To protect against internal political conflicts, America’s founders designed a solution to “the problem of faction.”

3) When the leaders of America's first two political factions retired from politics, they set aside their differences and renewed their earlier comradeship. In the correspondence that followed, John Adams even worried that his new country might not survive. He and Thomas Jefferson agreed that its only hope was to create a “natural aristoi” of better men to govern the common people.

4) Adams and Jefferson vacillated between two contradictory views of man in society. When they declared American independence, both men shared the vision being crystalized by France’s enlightened philosophes. According the Marquis de Condorcet’s Doctrine of Progress, the problems of man in society would be solved by the application of scientific reason. As they were, humankind would achieve a state of perfection. In their twilight years both men shared the pessimistic vision Plato presented in the Republic. Referring to man’s flawed character, Plato described the descent of society from a perfect state into anarchy and collapse.

The newest title in our "Pocket Book Illustrated Histories" series is now available in ebook formats for Kindle and Nook tablets. A summary of "The (First) Revolution in the Minds of the People" is posted online at http://www.commonwealthbooks.org/1st-Revolution.html. The title of the book comes from the letter John Adams sent to Thomas Jefferson on 24 August 1815 in which he claimed that "the revolution was in the minds of the people, and this was effected from 1760–1775.” On the 250th anniversary of its commencement, philosopher James Thompson took a fresh look at Adams’s revolution and discusses them in his newest book. 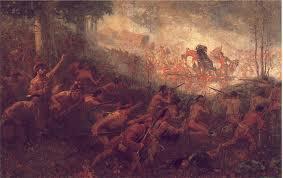 General Edward Braddock was shot during the Battle of the Monongahela on 9 April 1755. His army was destroyed, but his aide, George Washington, survived. He is pictured here reaching to aide his wounded commander. The painting was done by Edwin Willard Deming in 1903 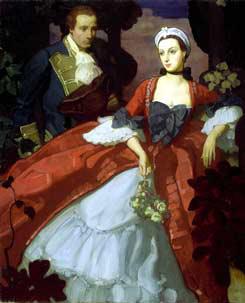 Stories about the Am Rev

Stories about the Am Rev

Commonwealth Books' newest publication is "The Storm Breaks" by James M. Bayne. This is the first book in our series of stories for young readers which will trace the American Revolution from the "shot heard round the world at Lexington Green on 19 April 1775 to the surrender of the British army at Yorktown in in October 1781.

Be the first to know and let us send you an email when Commonwealth Books posts news and promotions. Your email address will not be used for any other purpose, and you can unsubscribe at any time.

Other Book Stores in Alexandria