We are Teaching Quran online since 2005. Anyone anywhere can Learn Quran online.We took new step to To spread knowledge, join on social Media.

Our main purpose to creating this page to discuss and share our Lecture Lessons with more people. Our purpose is to deliver the knowledge at your door step. We warmly welcome all Students From All Religions, Race, Color, Genders, etc.

1- Recite dua after eating.
2- First remove the food then get up.
3- After meals wash both the hands.
4- Thereafter gargle the mouth.
5- After eating one should lick his fingers.

We are Teaching Quran online since 2005. Anyone anywhere can Learn Quran online.We took new step to To spread knowledge, join on social Media.

The Prophet (ﷺ) said: "The two rak'ahs (before) Fajr are better than this world and everything in it." [an-Nasa'i]

The month of Safar 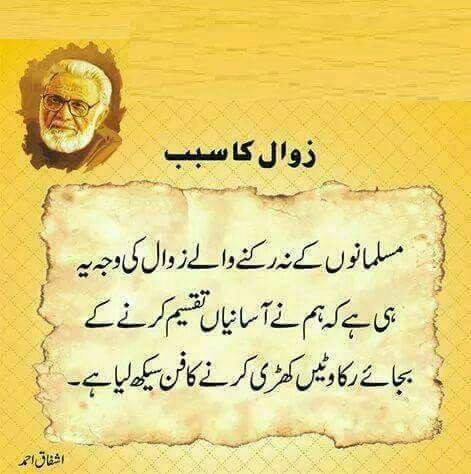 Doubting And Being Suspicious In Islam

What are you suspicious about? Are you letting satan sow the seed of fitnah among you?

Being suspicious or in doubt does not bring any benefits but harms you and your loved ones. When you are suspicious don't you spy? Don't you look after one another in secret? Do you think is it ok to spy?

While you find other faults being suspicious, remember Allah might disgrace you
Narrated AbuBarzah al-Aslami: The Prophet (peace be upon him) said: O community of people, who believed by their tongue, and belief did not enter their hearts, do not back-bite Muslims, and do not search for their faults, for if anyone searches for their faults, Allah will search for his fault, and if Allah searches for the fault of anyone, He disgraces him in his house. - Sunan of Abu Dawood, Number 2283

Do you want being disgrace? Why are you finding fault in a person? Do you have any right?

Allah says
"O you who have believed, avoid much [negative] assumption. Indeed, some assumption is sin. And do not spy or backbite each other. Would one of you like to eat the flesh of his brother when dead? You would detest it. And fear Allah ; indeed, Allah is Accepting of repentance and Merciful." Quran 49:12

Remember don't let Satan sow a seed of doubt, suspicious, etc in your heart even the Prophet was afraid of that

Bukhari Volume 8, Book 73, Number 238:
Narrated Safiya bint Huyai:
The wife of the Prophet that she went to Allah's Apostle while he was in Itikaf (staying in the mosque) during the last ten nights of the month of Ramadan. She spoke to him for an hour (a while) at night and then she got up to return home. The Prophet got up to accompany her, and when they reached the gate of the mosque opposite the dwelling place of Um Salama, the wife of the Prophet, two Ansari men passed by, and greeting Allah's Apostle , they quickly went ahead. Allah's Apostle said to them, "Do not be in a hurry She is Safiya, the daughter of Huyai." They said, "Subhan Allah! O Allah's Apostle (how dare we suspect you)." That was a great thing for both of them. The Prophet then said, "Satan runs in the body of Adam's son (i.e. man) as his blood circulates in it, and I was afraid that he (Satan) might insert an evil thought in your hearts."

If you are in doubt about someone or something why don;t you directly ask him/her about it? Is not that enough you ask him and sort out instead spying on one another and finding faults with one another?
And Allah Knows Best

Be the first to know and let us send you an email when Onlinequranteaching posts news and promotions. Your email address will not be used for any other purpose, and you can unsubscribe at any time.

Send a message to Onlinequranteaching:

How to Boost your memory.

Other Book Stores in Alexandria